Aniridia as a rare condition and its effect on psychological health 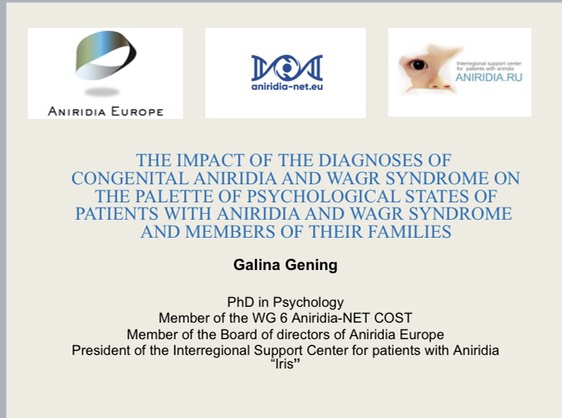 On 1st August 2021, in the framework of the 5th European Aniridia Conference, Dr. Galina Gening* presented the results of a study on the impact of aniridia and WAGR syndrome on the psychological states of patients and their families.
In the last decades aniridia and the related syndromes have been actively studied by geneticists, ophthalmologists and other scientists to get to a better knowledge of their physical manifestations and to develop appropriate care, but the psychological impact of the diagnosis and of a living with aniridia has often been neglected. Nonetheless, we know well that living with a chronic and progressive condition can cause big changes in the mental health of a patient, and this can affect their physical health too.
A few studies were performed in the past years, whose references you can find below. All showed that this issue needs to be explored further.

This is why in 2015, assuming that Aniridia and WAGR syndrome – like all other rare diseases – can have a huge influence on people living with these conditions and their families, Dr. Gening and her group decided to perform a study to verify this assumption.
At the first stage of research, they used Professor Prokhorov’s questionnaire “Relief of the mental state of the individual” (a method that allowed to comprehensively analyse all types of mental conditions) and Eysenck questionnaire of mental states (that allowed to determine the level of anxiety, frustration, aggression and rigidity).
In 2017, the research group developed a special on-line questionnaire in two languages (English and Russian), consisting of 33 questions for the study of some psychological states (hereafter PS) that were dominant in previous questionnaires.

The results of the research show that 83% of the respondents of the first group, 78% of the respondents of the second group and 87% of the respondents of the third group experience anxiety. The research group believes that this is the reason for the appearance of various fears in this categories of people. In one of the questions of the questionnaire, people were asked to list the types of fears that they experience in life. The answers in the first group were: “Lost mobility and social acceptance”, “To be blind”, “Lose my sight”, “The life of my child when I will be blind”, “To lose a job”, ‘Having kids’, ‘Losing my independence’, ‘Becoming more dependent on my family with progressive sight loss”, “About my son and grandson who both have aniridia”, “To be dependent of someone”, “Ending up alone”, “To lose my residual sight”, “I think we all can write a book about our fears”, “ fear of loneliness at the end of life and blindness ”.
In the second group the answers were: “Barriers in my son’s future life (work, couple, social inclusion)”, “fear that my child will go blind”, “fear of any future operations”, “fear of future health problems”, “fear of rejection of my child by society”, “fear for the future self-determination and confidence of my child”, “fear that she’ll be upset with what she was born with”, “my daughter becoming a blind person”, “that she will not have a happy life because of her disabilities”.
In the third group of people the answers were: “It’s awful to live in anticipation of cancer”, “fears of the death of a child”, “if I die who will take care of my child”, “fear of mental retardation of my child “, “fear of cancer after diagnosis”.

Another interesting PS manifested by the respondents was insomnia. Insomnia is experienced by 50% of the participants from the first group, 60% from the second and 47% from the third. In the first group of respondents, the reason of insomnia may be connected with the low levels of melatonin, which, according to recent studies in the field of aniridia (Hanish 2016), can occur in this condition.
As a psychological reason for insomnia, patients note “constant state of anxiety” and “chronic stress”.
The insomnia of the second and third groups of respondents has almost only psychological motivations: “fears”, “constant anxiety”, “heavy thoughts all the time”.
We can see that in all 3 groups frustration is taking the lead. This PS was noted by 95% of the respondents of the first group, 92% of the second and 93% of the respondents of the third group.
The reasons for frustration in the first group are: “when people don’t understand or believe I have a visual problem”, “when I can’t see or do important things for family members or for friends”, “my inability to do things quick enough, well enough, not achieving enough in a day”, ”not being able to change the attitude of people”, “with doctors’ incompetence”, “lack of communication”, “when I can’t help myself and need to ask for help”, “gradual loss of vision and the inability to stop it”, “when I can’t do what others are able to do ”,“ the realization that I have to invest 10 times more effort in the same volume of work that my colleagues do”.
In the second group, the reasons are: “bullying my child at school due to his condition”, “my teenage child has no friends”, “when I hear different recommendations from different doctors and understand that they are poorly informed about the disease”, “the realization that no one can cure my child”, “when I see that my child’s vision has worsened. “
In the third group, the answers are: “when you really try to develop your child, but the results are so minimal”, “when you put so much effort into the development of your child and there are no results”, “when I feel that the situation will never change, and it is forever”, “in people, even in relatives and friends”, “when people hurt our family”.

58% of the respondents of the first group, 74% of the respondents of the second group and 100% of the third group experience a state of guilt. The high percentage of guilt in the second and third group of respondents indicates that parents are poorly informed about the causes of the disease, parents tend to blame themselves for the appearance of the disease, which is absolutely unreasonable from a scientific point of view.
The state of self-doubt is experienced by 83% of the respondents of the first group, 90% in the second group, 67% in the third.
It is important to note that in the third group, 100% of the participants experience a PS of irritation, and 80% experience it often. They describe the reason for this PS is due to :“by my child’s behaviour – children with WAGR syndrome have difficulties in behaviour”, “your child will never be like others”, “there is no way to fix the current situation”.

An interesting fact we learned from our study is that only 16% of patients with aniridia are planning to have children. Let’s look at the answers.
Why do people with aniridia don’t want to have children?
The answers are: “I don’t want to pass on the condition”, “I don’t want to take the chance of possibly giving aniridia to any children”, “because the world isn’t ready yet”, “I wouldn’t hand in such a rare medical condition as there is a lot of worry involved…”; one respondent said “personal choice”, two other respondents answered “too old”.
People that answered yes added: “Yes, but maybe if I have an understanding partner otherwise I can also adopt”, “Yes, but not biological at least”.
Three answers were strong “Yes” with no comments.

In conclusion:
– Aniridia and WAGR syndrome, like other rare genetic diseases, have an essential impact on the quality of life of the patients themselves and their family members. This means that not only physical but mental health of these groups of people suffer.
– During the research, specific features of psychological states of patients with aniridia were found.
– A special palette of psychological states appear in family members of patients with aniridia and WAGR syndrome.

This report also highlights the disparity between the psychological health needs of aniridia patients and members of their families and the provision of services to meet those needs.
Psychological health services for patients with aniridia should be an integral part of aniridia care in places like Aniridia Centres, and this could significantly help to bridge the apparent breach between the level of care that is clearly needed, and the actual level that is provided.
Ideally, Aniridia centres should have a psychologist working with aniridia and WAGR syndrome patients.
Low vision services and clinics should also include assessments of mental health needs of patients with aniridia and give them access to mental health services.
Doctors working with these groups of patients should be informed about psychological difficulties experienced by these groups of patients and their family members.

At the end of the presentation, Dr. Gening expressed their thankfulness to all patients and parents of children with aniridia and WAGR syndrome who took part in the study for their willingness to share their views and experiences, and without whom this report would not have been possible.

The final take-home-message was: “You can be absolutely healthy and unhappy, and you can have a rare disease and be happy. It’s only your choice”.

*Member of Aniridia Europe’s Board of Directors, mother of a daughter with aniridia and a psychologist in her professional life

Some references
Jill Nerby and Jessica Otis, Aniridia and WAGR Syndrome. A guideline for patients and families, 2010
Long-term conditions and mental health: The cost of co-morbidities, published jointly by The King’s Fund and the Centre for Mental Health, 2012
Living with a rare condition: the effect on mental health, edited by the Genetic Alliance UK, 2018 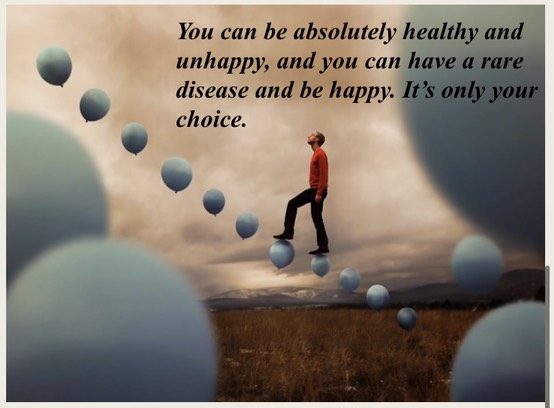